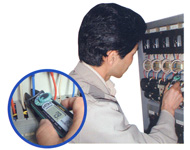 KEW FORK 2300R can be used in crowded connection boxes, where cables are very short, and space is too limited to clamp cables using with a traditional clamp meter.

Due to the use of thyristors, inverters and other energy-saving controllers in recent electric wiring, current waveforms often include harmonic components and are distorted compared to sinusoidal waves (50/60Hz).

(Compared to the true RMS value tester, measurement values for the averaging value generate more than 30% errors in some cases.)

Portable Test Equipments for the Measurement and Certifications of Electricity Meters

Stationery Test Equipments for Measurement and Certification of Electricity Meters